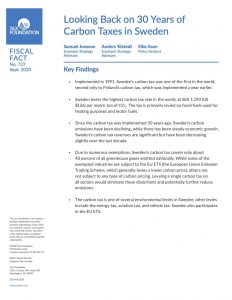 Sweden’s carbon tax was one of the first in the world and is now the highest rate in the world, although the tax has a relatively narrow base. Since the carbon tax was implemented, Sweden’s carbon emissions have been declining, while there has been steady economic growth. If well designed, carbon taxes provide an incentive to cut emissions on a large scale with comparably low economic costs. The Swedish example provides several lessons for policymakers to consider. The report can be found here.